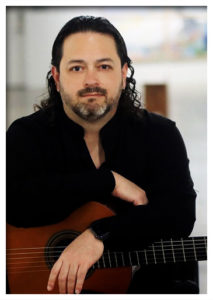 Jeremy García is a classically trained guitarist and noted composer who successfully transitioned to flamenco. As Associate Artistic Director of the Houston Classical Guitar Festival, he works with the Artistic Director and Education Director in the planning of each festival, including selection of guest artists and festival programming. At the festival he has conducted many workshops in composition and flamenco technique. He performs often as a soloist and with Solero Flamenco for festival and preview concerts.

In addition to many solo guitar pieces, García also is known for his composition, ”Suite Andaluz,” which evokes the influences of Andalusian folklore in three movements. Composed and arranged for full orchestra with flamenco song, guitar and dance, “Suite Andaluz” was recently performed by Solero Flamenco and the Helena Symphony Orchestra in Montana, as well as by the Brazosport Symphony and Grace Symphony Orchestra in Texas. “Concierto Nuevo Flamenco” is another original concerto he co-composed for two guitars and orchestra. As a soloist, García performed Joaquin Rodrigo’s “Concierto de Aranjuez” with the Helena Symphony (2017), Fort Bend Symphony (2006) and again with the Brazosport Symphony (2007 and 2016). His recordings of original music include Baile del Sol and Distancia.

García earned a Bachelor’s degree in Classical Guitar Performance from Texas A&M University – Corpus Christi and a Masters degree from Southern Methodist University in Dallas. As Professor of Music, García founded the guitar program at San Jacinto College that he directed for 20 years. He has an active performance schedule as soloist and with Solero Flamenco, and he is working on new compositions and other innovative projects. (jeremygarcia.net) 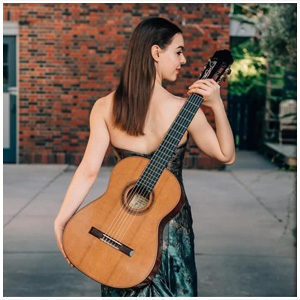 Clara McLain serves as Communications Director and as faculty for the Houston Classical Guitar Festival and Competition, teaching guitar technique to beginning and intermediate students and advertising the Festival and other performances.

She was a featured guest artist and teacher at the Summer Guitar Conservatory, a project of Guitar Initiative, a non-profit organization dedicated to providing free guitar education opportunities for students throughout Houston.  McLain formerly was faculty member at the “Classical Minds” Guitar Festival and Competition when it was in Houston.

McLain attended Brookhaven College, studying with Rodger Bennett, where she performed the Vivaldi Guitar Concerto No. 1 with the Brookhaven College String Ensemble under the direction of Dr. Matson Topper, and where she also received the Alice Jones Berding Award in Music. Clara then transferred to Southern Methodist University, receiving the Honor Transfer, Veritas, and Artistic Scholarships, and where, under the tutelage of Robert Guthrie, she earned her Bachelor of Music in Classical Guitar Performance.  Pre-college, She studied with the acclaimed guitarist and composer David Brandon at Texas Tech University in Lubbock; and privately with Robert Guthrie, Professor of Guitar at Southern Methodist University’s renowned Meadows School of the Arts.

McLain currently performs and teaches in the Houston and Galveston areas.  (claramclain.com)

Tickets are available on-line or at the door. Children under 12 are free.

For those of you that are interesting in volunteering please fill out the Volunteer form.

We welcome anyone who cares about fine arts and education delivered through the classical guitar. Participate in GCGA programs by volunteering in one of the
following areas:
• Leaders for Board sponsored committees
• Education and Community based outreach team activities
• Concert front of house teams – tickets, marketing and merchandise tables
A GCGA representative will respond to you inquiry.

If you’re interested in donating to GCGA please visit the Donation page.